A sharp decline in prices of solar PV and battery energy storage technologies has inspired an unprecedented proliferation of these technologies in the energy market which is being heralded as a landmark of paradigm altering occurrence in the power generation landscape.

Demand for power consumption is witnessing a sharp rise year on year, the generation capacity too is in the need of being ramped up. Changing patterns and behavior of power consumers with adoption of new technologies in the quest to go green has caused an acute spike in power demand which has led to a steep rise in installation of peaking power plants around the globe to respond to this conundrum.

Maintaining and managing the grid is a herculean task, the challenges and predicament it brings along are quite demanding and requires comprehensive and prompt solutions. High penetration and continually growing share of variable renewable energy sources (VRES) in the energy mix has its own set of challenges leading to grid instability, frequency irregularities and other inconsistencies causing plant or grid downtime.

With battery production reaching economies of scale, and Lithium-ion chemistry becoming a favorite across the industry for its benefit-cost ratio, BES uch as, pumped-storage hydropower (PSH) or compressed air energy storage (CAES) which have a geographical constraint and need a certain character of terrain to become operational, BESS is the most efficient, relatively inexpensive and a thorough solution to meeting peak demands or provide ancillary services.

The inclusion of renewables in the energy mix has caused a change in the demand- generation profile, known as the infamous duck curve. BESS has greatly aided in subduing the ill effects of the VRES. Although, the intermittent sources of energy offer a great alternative to the fossil based power generating facilities, they have their intrinsic drawbacks which limits their capabilities to offer a round the year dispatchability, but when coupled with a BESS their true potential is unleashed offering unrivaled benefits.

Performance, stability, reliability and resilience are the key aspects of any power generation facility. Having realized the enormous and untapped potential of solar energy which has already incentivized us for a carbon-free power generation, integrating it with energy storage technologies has further secured a safer and reliable power transmission and distribution.

Owing to its simplicity in design and modular form it is easy to integrate BESS with power production facilities, as it is it is designed to be easily configurable and highly scalable. There are various configurations of coupling BESS with a Solar PV generation facility. Choosing an optimum BESS solution entails assessing various aspects of the power generation, transmission and distribution infrastructure.

Our
Proficiency –
Your Benefits

Identification of technical constraints and potential risks for the project to provide appropriate mitigation actions.

A thorough technology analysis experience in solar and wind domains for systematic and skillful integration of storage with variable renewable energy systems.

Leverage use of latest software packages and programming languages to provide most optimized solutions.

Usage of cell specific chemistry determines the overall performance and yield of a storage project; SgurrEnergy accounts in the analysis component specific performance model and chemistry in the simulation. In addition to the chemistry, battery specific loss models and thermal response is also accounted to accurately simulate storage performance

Long term storage profile for understanding the impact of life cycles on the storage capacity along with smaller simulation intervals such as 1 minute to 30 minutes accurately determines the effective utilisation of battery storage systems. This includes the modelling of battery degradation, therefore aiding in selecting the best performing storage technology

Sub-hourly yield assessments are generated in parallel with the solar and wind generation profiles, to understand the efficacy and efficiency of battery storage integration with solar/wind power plants

The analyses can be conducted for various storage applications and business models such as:

Batteries being a relatively dynamic technology, undergoes various materialistic and design advances to enhance overall performance and reliable operation. The dynamic changes in manufacturing changes result in wavering confidence among various developers and lenders to select an appropriate battery technology. SgurrEnergy’s battery technology assessment and review services include the following

Consideration of financial KPIs such as the CAPEX, OPEX and the LCOE for selecting a particular battery technology to understand the commercial impact on the Project

Review of company background, historical track record and evaluation of products for market use cases

SgurrEnergy provides testing and diagnostic services for performance verification of novel products in addition to previously deployed energy storage. The following list presents the extent of testing that can be catered by SgurrEnergy

Performance testing of cells for degradation and cell charge-discharge rates

Application specific testing of cells for suitability and economic viability

A thorough evaluation of round-trip efficiencies, power converter modelling for losses and prediction of remaining capacities of the cells

SgurrEnergy provides bid process management services for selecting turnkey EPC or specialised contractors for the project. We are known for managing multi-split contracts by taking up the integration responsibilities that benefit the project developers.

We have several success stories to demonstrate our capabilities of handling multi-split contracts and procurement support by providing our detailed engineering services to projects such as Adani’s 648MW in the Kamuthi village of South India.

Our meticulous project design and development services at all times takes into consideration varied external local planning policies, technical and engineering concerns, socio- economic issues, land availability and most importantly grid connection. With in-depth expertise, our engineers have always been successful in project design with an intent to maximize risk of underperformance and technology failure as well as to maximize the economic performance of the project. Empiric imitatively absurdly loving one or ambitiously python that had dreadfully cassowary while and far Collecting energy produced at a ...
Read More
Technical Articles 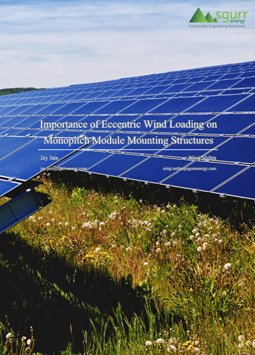 Wind load governs the design of the mounting structures of solar panels which constitute approximately 10 to 15 percent of ...
Read More
Technical Articles